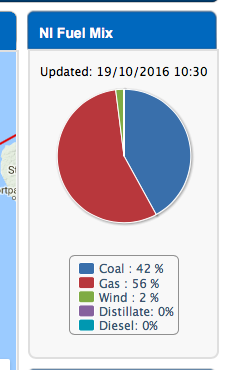 On those days when the sun is shining but the wind isn’t blowing, our wind turbines sit idle.

At ten thirty this morning wind farms were meeting just two per cent of our electricity demand. Filling the gap have been generators burning gas but also coal. Kilroot Power Station which uses coal has been supplying around forty per cent of our needs. That’s a vastly higher proportion than across the water where coal this morning has been responsible for less than ten per cent of GB generation.
So why the huge difference? A few years ago when the Government introduced a special carbon tax called the Carbon Price Floor, Northern Ireland secured an exemption arguing that the same tax would not apply in the rest of the all island electricity market which would put our coal fired generation at an unfair advantage and also raise the price of power. One can view an exemption from what everyone else in the UK pays in different ways but I think it’s fair to call it a subsidy
As a way of keeping electricity prices down, it has worked. The policy has been helped by a steep drop in the price of coal. But coal burning brings with it high levels of carbon dioxide, a main source of climate change. Coal fired generation produces seventy per cent more carbon dioxide than gas fired generation for each megawatt hour outputted.
If you don’t accept climate change, a policy of supporting coal burning probably makes sense but we are supposed to be combatting global warming. That’s why there are subsidies for solar panels and wind turbines.
The result of all this is that at the same time as we are subsidising renewable energy generation to reduce greenhouse gas emissions, we are effectively subsidising coal fired generation which increases it.
This could change but not through our doing. Thermal coal, the stuff they use in power stations, which has been as cheap as $40 a tonne is now over $100 a tonne. That will make coal fired generation less attractive but what really counts in all this is not just the absolute price but the cost in relation to gas. And gas is not rising so fast in price.