Cheapest way to heat your home 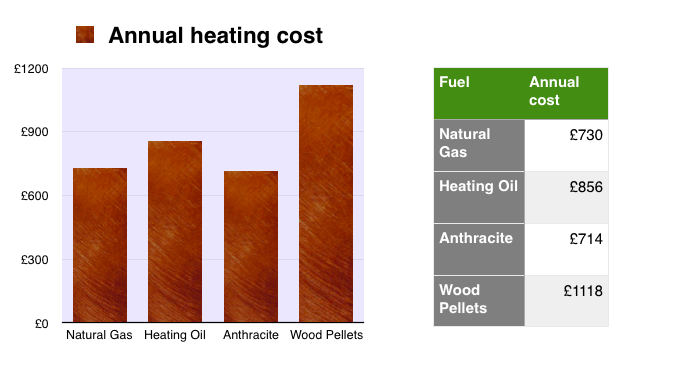 What is the cheapest way to heat your home? I’ve been comparing four fuels which over the years have been commonly used for central heating.

The current league leader by a small margin is coal in the form of anthracite grains or beans which can been loaded into a gravity fed boiler. This fuel is not nearly as popular as it used to be but some homes still use it.

Of far more interest I suspect is the battle between home heating oil and natural gas. At the moment gas is maintaining its lead. The price gap between the two fuels has widened from around £40 a year to almost £120 over the past three months.

It’s caused by two factors. The cost of gas was cut recently while the price of oil has risen. It’s fair to say that the present gas tariff is likely to remain in place for the next twelve months.  The price of home heating oil however will surely fluctuate because of global events.

Wood pellets trail the other three fuels by a fair margin. I have based my calculations on a delivery of half a tonne. It has been pointed out to me by pellet supplier Balcas that customers usually buy three tonnes or more at a time. At that bulk price, pellets would be comparable on cost with natural gas and that’s without any form of RHI subsidy. However I reckon that most households would struggle to accommodate such a large pile of pellets but if you have any thoughts let me know.

Perhaps it would be helpful to hear how the comparison is carried out. I choose the most efficient way of buying the different fuels. In the case of natural gas that’s using firmus energy which is cheaper than SSE Airtricity and buying by direct debit with online billing to take advantage of the discount available.

I also assume that consumers are using the most efficient boiler on the market though in reality, many households especially those on oil have older equipment. Lastly I calculate on the basis of the same amount of heat delivered into the home, not on the same amount of energy consumed by the different boilers.

Longterm it’s impossible to predict whether natural gas will retain its price advantage over oil. However a number of points can be made. There is a glut of gas on world markets which has been substantially created by excess amounts of liquified natural gas arriving in Europe by ship.

Cargoes are not guaranteed to continue to arrive here in force. Other markets could in time look more attractive. However it helps that the UK has plenty of capacity to receive LNG shipments.

Five years ago the price of Brent oil hit $114 dollars a barrel. It’s less than half that despite the Middle East continuing to be a volatile region. The boom in US shale oil appears to be playing a part in keeping the market in check. But again who knows what happens from here.

That’s why it pays to keep checking what the current costs are. For a more detailed profile of the calculations look here https://enirgy-info.s3.amazonaws.com/downloads/chart/infopack_uri/6/Heating_comparison_Oct_2019.pdf

Finally if you have any comments, please don’t hesitate to get in touch.