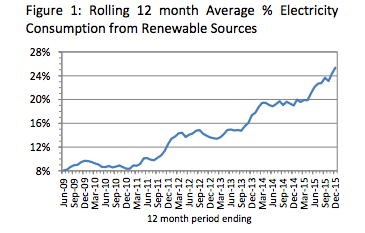 Last year just over 25% of electricity consumption in Northern Ireland was generated from renewable sources based. That’s an increase of 6.4% on the previous12 months and is the highest rolling 12 month proportion on record. The vast bulk of green electricity produced in 2015 - just over 90% - was generated by wind turbines.

December past produced not just the highest monthly percentage of renewable electricity in 2015 but, at almost 40% of consumption, the highest on record.
The figures may somewhat understate the amount of green electricity produced. Power produced by those who generate electricity mostly for their own use but who may spill some onto the distribution network is not included as information about micro generation or consumption is not available to NIE Networks who collect the data.
That said micro generation is reckoned to make up only a small fraction of total metered generation. However it is also worth pointing out that some imported electricity that is consumed here will have been generated from renewable sources outside Northern Ireland. The full extent is not known and thus cannot be reported.
Source: DETI