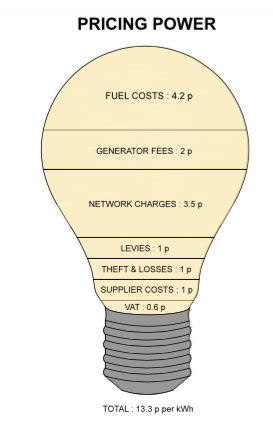 A question I’m often asked is: why does electricity here cost so much? My response is that it could be worse. If we paid similar rates of VAT on energy as other countries, prices would be substantially higher. As it is, the cost of power for consumers is a bit over the average for EU countries as a whole but the underlying price, that is before VAT is applied, is significantly above than average.

Various reasons are advanced as to why prices are high. The extra costs of bringing fuel all the way over here to power stations and a lack of competition in the retail market. The truth is that there is no definitive answer to this question.
I decided to approach the issue from a different angle. If consumers were able to access their electricity through the wholesale market, what would the cost be? At the moment companies can do this but not households. That’s partly because no supplier is offering the option and also because one would need a meter able to take account of constantly changing wholesale prices - they adjust each half hour or 48 times a day. But there’s nothing to stop one carrying out an exercise to see what the price might be and that’s what I did for the month of March this year.
With the help of an industry standard profile which shows typical household power consumption for each half hour and applying that to the varying half hour rates, I was able to calculate what the wholesale cost of electricity would be for a typical home during the month of March this year. To that I added in all the various charges and levies that electricity attracts including supplier costs and came up with a price of just over 13p a unit or kWh.*
This is below the rate any domestic supplier charged homes in that period. It is almost five pence a unit less than the standard price that was on offer from the two biggest suppliers in March. Since then the cost of electricity has been reduced. Nevertheless many homes are still paying over 16 pence a unit for their power
What accounts for this difference in costs? My analysis uses floating wholesale prices which means charges varying from month to month. Consumers generally prefer suppliers to offer them the certainty of flat prices. Suppliers intent on safeguarding their companies from volatility will thus have to hedge which will increase their costs.  However I’m not convinced the cost of hedging alone can explain the difference between what we pay and the rate I’ve calculated.

To some extent all this is academic. Though there is a proposal to offer NI consumers half hourly or smart meters, the plan unlike in Great Britain, hasn't got very far. Without these meters, consumers will not be able to access the lower charges apparently available in the wholesale markets.
*See attached graphic.